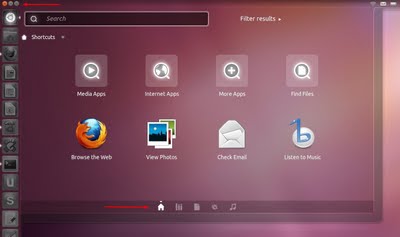 With Microsoft now showing off their new OS, Windows 8,  Canonical is bringing some heat with their Linux System, Ubuntu in the new Unity Desktop.

Unity is based off of the GNOME desktop but for many people the latest GNOME 3 desktop was a flop. It isn’t designed for Linux ‘freaks’ with its interface being based more for tablet users. Its more for the casual user who might turn it on once or twice a day. I’ve been viewing  Ubuntu 11.10 beta and I am very impressed with the company. The second BETA release will be September 22 & the last will be October 13.

So what can we expect to use in  Ubuntu 11.10? Currently the default browser is Firefox 7 beta and Thunderbird 7 beta is the email client.  There is also an alt+tab interface and Deja Dup is the backup tool. Of course as it evolves, more will be added and changed.

So are you excited to get your hands on Ubuntu 11.10? I am and I cant wait. Don’t forget to check out BETA!