Apple invites the media for an 'education announcement' next week in New York! 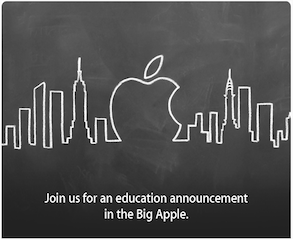 Hey guys! I know it has been a while since I put up an article, but I took some time off for the holidays and was recently very busy when I got back. However, no need to worry because I’m back now and a big announcement came out of Apple recently…which of course means an article!!

First reported by the Loop, Apple has sent out invites for an event in New York next Thursday on the 19th of January. The invitation features the New York skyline with a tagline reading:

Join us for an education announcement in the Big Apple.

The event is not expected to be a huge deal, at least not compared to the normal theater style announcements, but it is still an Apple event so we can surely expect something innovative. The event will not cover any iPad or Apple TV news or anything of that sort. However, it has been reported that the event will focus on ibooks.

Since education is going to be the focus it leaves ibooks as an option to be talked about and possibly textbooks, another market Steve Jobs wanted to revolutionize, as the main attraction for this event.

So what do you guys think could be talked about at the New York event next week? In case you guys did not know we at WW Computer Repairs are doing live blogging of CES 2012 for the first time, so stay tuned here for all your latest CES news!!!

Below is an excerpt from the Steve Jobs biography:

He held meetings with major publishers about partnering with Apple, the book says. If textbooks were given away free on iPads he thought the publishers could get around the state certification of textbooks. Mr. Isaacson said Mr. Jobs believed that states would struggle with a weak economy for at least a decade. “We can give them an opportunity to circumvent that whole process and save money,” he told Mr. Isaacson.