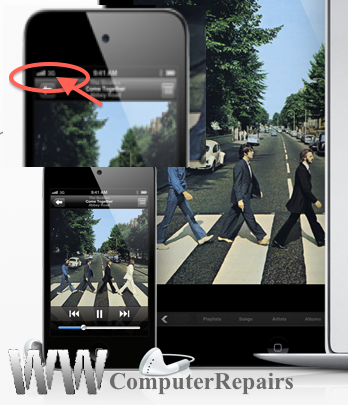 Update: Earlier today we said that on the iTunes page of Apple’s website the iPod touch picture has a 3G symbol. As of now it has been taken down and replaced with an iPod and Wi-Fi logo. This is not the first time something like this has been released from Apple. Read below for more on that but it was a legit feature that was leaked that came later. This does make an interesting story and it definitely seems like it is a sign towards something.

The most interesting news of the day may have just showed up! We have seen what appears to be  a sign towards the next-gen iPod touch features. Technobuffalo.com has also  reportedly spotted this as well.

While browsing the Apple website we ended up on the iTunes page and the picture which has an iPod touch caught our attention. At the very top it has a very very small 3G symbol on it. Below it is hard to see but it shows  very distinctively if you look closely that it is a 3G symbol.

It is not exactly something we would expect Apple to do before a product launch, but it has happened in the past. A little while ago the site accidentally leaked a picture of the cinema displays with thunderbolt capabilities. So upon that, it is likely this means something.

Recent reports have claimed that Apple is likely bringing 3G to the iPod touchs in the nearby future. 3G would be an addition to help out with items such as iCloud and the new iMessage. The artists for Apple could have made a mistake when designing this, but until we can uncover more we do not know what this means. It definitely starts grinding the gears of what’s to come next.

What do you guys think of this? Is it a flaw that was posted on accident? Does it point to a 3G next-gen iPod? We want to know! Leave what you think below!