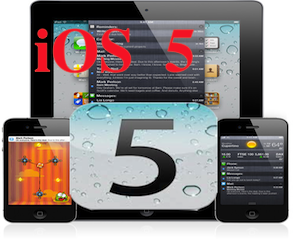 Last week Apple scheduled an October 4th media event. The event is supposedly going to focus mostly on the new iPhone hardware. However, wether or not your new iPhone will have a better camera is not the only thing that will be presented at the event. Apple is widely rumored to announce more details on iOS 5 and iCloud. Each are set to launch very soon. So, with that in mind here is how you can prepare for an iOS 5 update for your iPhone, iPad, or iPod. Lets get started!

Note from our Editors: This update will work on any device with any iOS version as long it is eligible hardware. The eligible hardware include the iPad and iPad 2, iPod touch 3rd and 4th generation, and the iPhone 3GS and iPhone 4. This is not an actual how to on how to update but on how to get ready for the update.

#1 Clean out What you don’t need – A new update is a time to start clearing out what you don’t need. Do you honestly need that talking cat app or that Rebecca Black song? (Not that anyone would have Rebecca Black on their music list anyways) Since you are ready to update and iOS 5 will allow to not have to go to your computer to sync you should get rid of the un-needed stuff. Cleaning house and deleting the pointless stuff and organizing those messy home screens will really clear some space. It is worth visiting iTunes one last time.

#2 Plug it in to iTunes one last time – Connect your iDevice to iTunes and right click on your device in the left-side navigation bar of iTunes. Click on Transfer Purchases and let iTunes do the rest. Do this to make sure all music, apps, videos, etc. you have bought on your device get transferred to your iTunes library. Depending on how much you have, this could take an exceptional amount of time (especially on a PC) so just sit back and relax until completed.

After that go to the top and go through the tabs from summary until you get to photos. Under summary make sure to check for updates and the latest iOS version to ensure you get a smooth transition to iOS 5. Go through the rest of the tabs and organize your apps, photos, music, etc. As a reminder get rid of the apps you haven’t used or looked at in a while.

#3 Organize the stuff you DO use – Once you have finished the 2nd step make folders for your apps for quick access to them under the apps tab. (To make a folder drag one app on top of another. EX: Drag a racing game on top of a racing game) iOS suggests names based on whats in the folder. If you want quick access to an app leave it out of a folder. For more used apps, we recommend you put them in a corner of your screen so you know exactly where to go. For example, my Facebook app is in the bottom right corner of my first screen.

After apps go through music, videos, and everything else. Do not sync things have you already viewed or do not listen to. Decipher wether you use them or if they just live on your computer’s hard drive. Also, decide what photos you want. Do not sync 1,000 photos to your device!

#4 Time to sync – Once you have completed all that painful organizing and deleting it is time to sync your device. Even though it may feel like the end we recommend waiting until it is fully synced and back it up one last time just in case you ever need it and to make sure it has saved your last configurations.

Your iDevice is now perfectly ready for iOS 5 to be downloaded and installed when announced!!! Hopefully, it will be announced soon at Apples’s October 4th event. For the latest How To’s and Do It Yourselves along with news, reviews, unboxings, and more subscribe to WW Computer Repairs and iPodz Helperz on YouTube and follow us on Facebook, and Twitter!