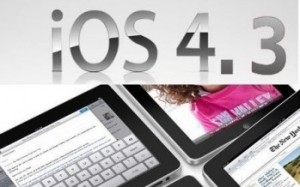 This version of iOS brings new features to the iPhone, iPad, and iPod Touch.  The iPhone 4 gets the Personal Hotspot feature.  iPad gets multitouch gestures for the multi-tasking dock, to go home, and to switch apps (developers only).  Also the iPad received an option to change what the hardware switch (by the volume buttons) will do (silent or rotation lock).  The iPod Touch got no new device specific features.  All of the devices that are supported (iPhone 3G and iPod Touch 2G support was dropped) will receive the ability to cancel an app upon downloading, AirPlay improvements with support for third-party apps, subscription based payments to the Apple App Store, Nitro JavaScript engine in Mobile Safari, iTunes Home Sharing in iPod.app, and other system wide changes.  This release also adds support for FaceTime and PhotoBooth for iPad 2.