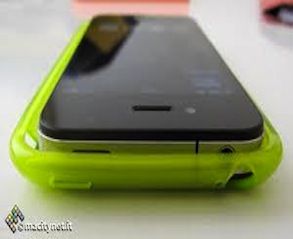 Earlier in the year cases started popping up claiming to be iPhone 5 cases. While we have also seen many alleged iPhone “4S” parts there has yet to be any actual photos or proof of some kind showing off the new iPhone. It is very unclear at what the iPhone 5 will contain or even look like. Early April is when we first heard rumors of a radical casing design for the new device. The reports stated the phone would have a “teardrop” form factor thinning out as it got closer to the bottom.

In late July a document showing a iPhone 5 rendering, shown below, made its way to case manufacturers.The case makers had a lot of confidence in this design because after a short while these third-party manufacturers sent there cases out to vendors.

Macrumors.com made a similar rendering and took measurements on it. The measurements are inside the above document. Macrumors then went out and bought one of these cases floating around the market and took measurements comparing them to the iPhone 4 and their above renderings. By purchasing this case they also confirmed they exist and are available to the consumer public.

The company says it was hard to get exact measurements, but they were able to estimate the size of the phone at approximately 4.7″ x 2.6″. The iPhone 4 is 4.5″ x 2.31″. The thickness was also hard to obtain, but Macrumors stated that the device appears to be below .30″ at its thickest point and appeared to taper by approximately .65″ from the top of the device to the bottom.

Based on the information taken from measuring these alleged iPhone 5 cases the iPhone 5 will definitely obtain a 4″ screen. Remember that these are still all rumors and these cases may or may not be for the actual phone. However,if it is for the actual device a 4″ screen would be a phenomenal upgrade from the current 3.5″ screen. More photos were posted of the supposed iPhone 5 case being compared to the current iPhone 4. The full gallery of photos can be found below.

The iPhone 5 is expected to be unveiled sometime in September and launched somewhere in October.