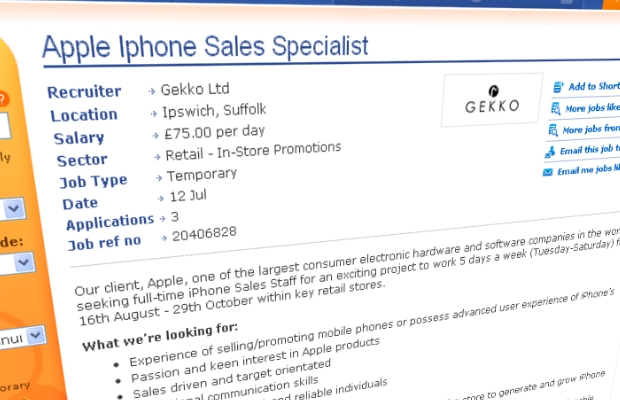 Coming from a report from CNET.UK seems to imply that there could be a possible iPhone launch on August 16th. Their source? A job listing.

The listing posted by  Gekko Ltd., says that Apple is looking for a”Full time iPhone sales staff for an exciting project working 5 days a week (Tuesday-Saterday) for the time period of August 16th – October 29th in key retail stores”. Oddly though Apple didn’t post this on there own but hire  Gekko Ltd., to do it and it seems Gekko has worked with apple before.

“The awards page on Gekko’s website indicates that it has worked with Apple in the past on shops within shops — the specific Apple-branded sections within larger outlets. We’d wager that Gekko is hiring to fill these sections, as one of the responsibilities of the advertised role is to “ensure the Apple area within the store is effectively merchandised”.

Rumors have been pointing to a September or October launch and they have been prevalent thus far as Apples music event is in early Sseptember but we are always happy to get on that line early for an iPhone. Below is the full listing of the job listing from Apple: