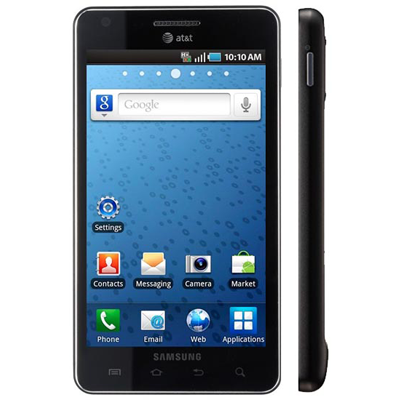 It seems everyday a new phone is coming out. So which do you get and which one is the best? Over the next week or two we will rank the top 5 phones on every carrier. Including AT&T, Verizon, T-Mobile, and Sprint. What better way to start the countdowns then with the largest U.S. carrier AT&T.

The iPhone 4 is a little over a year old already so why is it number 1? Well for a few reasons. It has the highest consumer demand on the market, it has a beautiful retina display that beats most, the camera is amazing, and the biggest factor the simplicity of iOS. It does everything people want out of a smartphone easily and not over complicated. People can learn the UI very easy and the demand for it just goes up all the time. Apple produced a winner.

This phone is an absolute monster. Its 4.5 inch Super AMOLED touch screen is amazing. It makes everything pop out and looks realistic. It is extremely fast and takes advantage of its 4g, and even though its single-core you can not even notice its so good like that. The phone is pretty huge though. It has a 4.5 inch screen, but makes up for it with a great slim feel and design. All around, this is by far the best Android phone on the line-up, and its $100 price tag makes it even better.

Motoblur is the worst Android skin on the market in our opinion, but not even that can downgrade this phone. Its dual-core processor is blazing fast and its 8 megapixel camera is not bad and takes decent photos. One down side, the lock button. It is horribly placed behind the phone. This flaw was not thought through very well, but it makes up for it with its super cool and highly useful laptop dock. The entire package was just lowered to about $400 for the whole deal and $100 for just the phone itself. If you do not mind the prices for the phone or whole package and a badly placed lock button this is a great phone to pick up.

The best Android skin out on the market today is HTC Sense with out a doubt, and thats who makes our #4 phone. HTC. This is a fantastic phone. 1 GHz Snapdragon processor, 8 megapixel camera with dual LED flash and auto-focus, runs Android 2.2 and HTC Sense 2.3 (No HTC Sense 3.0 unfourtanately), and a pretty good 1230 mAH battery. So why is it at #4? Well first no front camera so you can not video call or skype your friends. Bummer HTC especially since this is a high end device. The other reason is design. Yes it is very slim and nice in the hand, but its industrial design is a turn off to people and it has an extremely hard battery door to open. Overall it is not a bad phone definitely consider this one.

This is a good option if your are not looking to spend a lot on a smartphone. It is actually free as of now, on contract, and you get a lot out of this guy. A 4 inch beautiful Super AMOLED touchscreen, 5 megapixel camera that takes good pictures with auto-focus but no flash, records 720p HD video, and Android 2.2 OS. The only reason it is at #5 is it is not as high end as it was. There are better options out there, but it is a good medium to high end smartphone for a low price. It is not as fast as other phones out there which is a bummer, but if you do not mind that it is still decently fast definitely put this into your list of smartphones to consider for purchasing because it will not disappoint!

There are definitely more high end phones coming soon like the LG Thrill and Blackberry Torch 2 and possibly the Nexus S 4G. As of now though, these are the phones you have to give a look.