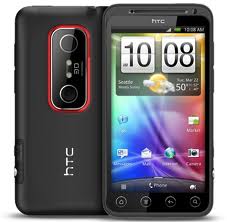 The first 3D phone is quite a hit. Personally 3D on a phone thats very cool, but even if you do not like the idea of 3D on a phone you do not have to use it and it still is a great phone. It has a Qualcomm Snapdragon processor, Android 2.3 OS and Sense 3.0, dual 5 megapixel cameras and dual flashes, front camera, and 3D photo and video capture. There is not much bad about it, but if you sill are not convinced maybe our number 3 phone will be a better option.

This one is a toss up. They are the only two phones with a QWERTY Keyboard that are actually good. So between them we could not decide. The Epic 4G has a big screen and nice roomy keyboard. Unfortunately, there have been a few reported issues, but nothing major and should not be worried about. The Evo Shift is just a popular phone many people like HTC and the Evo feel so this is just a smaller Evo with a few less features and a keyboard. Either way both are great options and each are unique just like the Olsen twins or Dylan & Cole Sprouse….. on second thoughts this is different.

This phone may be a year old, but it is still a fan favorite. The Evo 3D is now more up to date, but this is still a great phone to own. 8 megapixel rear camera, 1.3 megapixel front facing camera, Android 2.2 OS, and of course a kickstand to add to the social media, large screened, wimax compatible beast then this is the one for you. Or if you just do not wanna risk the 3D headaches with the Evo 3D, then thats cool too and this is a good option for that as well.

Now guys do not be hating! I know that some of you think this is a joke, but I am being as serious as Hulk Hogan in a WWE match! Windows Phone 7 is not as bad as it seems. Yea it is not a favorite, but lots of people like it. The HTC Arrive is the best WP7 offering on Sprint and it is going to be Mango Compatible. It also has an easy to operate UI and is good for certain people. It is also number 4 because it has a great design, 8 megapixel camera, full QWERTY keyboard, 1 GHz processor, and pretty good 3.6″ WVGA touchscreen. Also, number 5 is still good but bland now!

The Nexus S is not a bad phone at all. It has a good 4″ super AMOLED screen, pure Android experience, it is hacker ready, and it is small and pocketable. It would be hard to say bad things about this phone so why is it so low on our list? Well two things it is not the best phone on the line up. The HTC Evo 4G and Evo 3D are both better and more popular taking the cake for sprint. In addition some people may not like the feel and look of its curved design or even because there is no keyboard like the Epic 4G or Evo Shift. Either way there is better out there. Also, its not much of an update. The Nexus S to the Nexus S 4G is not much of an improvement and that is what made some people upset. Whatever the reason it is still not a bad option and if you just want a reasonable sized smartphone that is good for $150 get a Nexus S 4G.

Don’t worry guys still more great phone glory to come with our last countdown! It is coming soon, in the meantime leave your comments of this list below along with suggestions for top T-Mobile phones with the phone name and why you think it is worthy. As always check out our facebook, twitter, and youtube channels!

Thats it guys see you in the next countdown list! Peace!