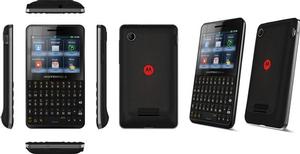 Although Motorola is now owned by Google, and Google+ is the direct competition to Facebook, it seems strange to see that a Motorola Facebook phone could well be coming in line with the likes of HTC and INQ who already have a couple Facebook handsets of their own, and this phone could be in the midst of arriving on our shelves soon. As you can see, it totes a full qwerty keypad, and if you look in the bottom right hand side, you’ll see a little familiar looking blue F, perfect for Facebook junkies who are constantly uploading a photo, updating their status or  Facebook stalking their friends :p. It was originally spotted by Boy Genius Reports, and eventually made its way onto the net. The specs we know about so far are pretty mediocre, with 3G, a 3MP camera, and of course, the qwerty keypad. It’ll have a not-too-amazing 2.8″ TFT display, but no word on it being touch screen as of now. Oh and it’ll also have a duel sim card slot, probably for businessmen who want to keep their social life separate from work.

So what do you think? Do you think it’ll be able to compete with the likes of the HTC ChaCha, or the INQ? Leave your thoughts in the comments below 🙂