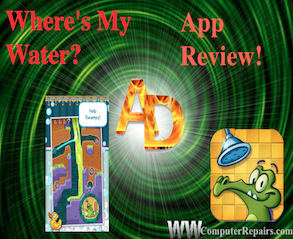 Whats up guys? I know its been a few weeks since one of these went up but they are going to start up again. Also, if you did not know we are now going to do weekly App reviews on our iPodz Helperz channel so go check that out. So since this is the first app review in a while I decided to just start with a simple fun for everyone game. It is called Where’s My Water for iOS. So lets take a look at it.

So Where’s My Water is a fun addictive game much similar to Cut the Rope or Angry Birds and other addicting games of the sort. So the objective of the game is you are under ground and there is a pile of water that you have to get to an alligator by dragging your finger through the dirt creating a path. The tricky part though is getting past the obstacles like poison, acid, and explosives.

One of the best parts of the game is that it can keep me entertained for hours on edge sometimes. I find myself saying I will play for like 5 minutes and it turns into about 35 minutes. I know just by me describing it you would rather hit your head against a wall or something, but it is created by Disney which makes it a good game for little kids and adults alike just like their movies. I mean who doesn’t like Disney and their Lion King, Toy Story, and Aladdin?

However, I do not like the game that much because it is extremely simple to beat the game and after like two to three weeks of having it you start to find it boring. I found myself playing each day less and less as I had to replay the same levels. I started to think that it was becoming a pretty bad game. After a little while though it was still pretty good.

So Pros were that it was really fun and addicting. It was good for all ages and Disney did a good job. Cons were that it got really boring after a while, but was still alright.

So thank you guys for stopping by. Lots more app reviews coming soon and for app review videos check out our iPodz Helperz channel HERE. Also be sure to subscribe to our main YouTube channel and follow us on Facebook, Twitter, and Google+! So I will talk to all of you later. Peace out!!