Changing from a 64 bit to 32 bit Operating System 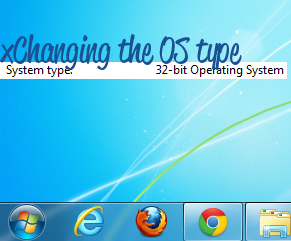 Last night my computers hard drive filled up completely. It’s only a 200GB so I knew it would happen sooner or later, considering I save everything and download anything. I took this as an opportunity to install Windows XP. Surprisingly it went smoothly.  When I finally got into the OS, I could not connect to WiFi and that was an issue because any internet usage would have to be done on my ancient laptop running Windows Vista. I thought about it. Then it came to me; I’d copy Daemon Tools to XP via a flash drive,  I would install Windows 7 and be back and I wouldn’t even have to go through all that extra stuff that you have to go through when you register a Compaq.

So that’s what I did and it only took about 20 minutes to go through installation which is about 4 and half hours less than what it takes with a disc. I finally got settled in and used The Cloud to restore my files. Finally I wanted to install WinRAR. I went to rarlab.com and download the 64 bit version as always. I clicked the file in Chrome but what happened? Nothing. So I re-downloaded it and still nothing happened. I found its file in the downloads folder and clicked it. I eventually got an error saying that this download was incompatible with my version of Windows or something along those lines. I clicked the start menu, right clicked “Computer” and selected ” “Properties”. Here’s exactly what I saw:

So I guess I did what most people believe is impossible. I switched from a 64 to 32 bit operating system. At the time of writing this, I’m not really concerned about switching back to 64 bit because I have a new desktop computer waiting for me at Best Buy.

Guys, I hope you had a wonderful and blessed Thanksgiving. Thanks you for reading my post after all this time. School has been taking over my life lately but I’m writing when I get the chance or find something interesting to post about. My next post will most likely be in December so I’ll see you then! Bye,

How much RAM is installed because if you have anything over 4GB, you might want to reinstall a 64 bit version.

I have a 2GB RAM.
Also, to anybody thinking about doing this with their computer, I don’t condone and will not be held responsible for anything that happens to your computer, for example, corruption may occur.