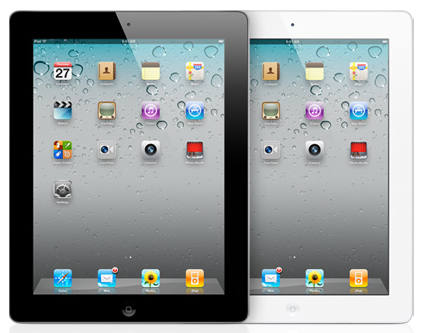 The iPad 2 is finally here. After months of rumors Apple finally unveiled the new product at a keynote today.

The iPad 2 has a front facing camera for facetime, a rear facing camera that shoots 720p HD video with 30 frames per second and 5x digital zoom, it is also 33% lighter than the original iPad. The iPad 2 stands at 8.8 mm thick compared to the iPhone 4 which is 9.4 mm thick. It is 2x faster than the original iPad and has 9x faster graphics. It is powered by an all-new A5 dual core processor also unveiled today. The iPad 2 is also has the same 10 hour standby time as the original and in a thinner, much better feeling iPad. It also includes HDMI out and mirrors the screen.

The new iPad 2 also has a series of new apps such as photo booth, imovie, and garageband.

The iPad 2 prices are the same as the original

Today however, the iPad 2 was not the only thing announced. A new cover/case like thing was introduced. It perfectly fits the screen and attaches magnetically. It folds in sections to make a stand to prop it up to type or watch a movie. As soon as you lift the cover the sensors automatically wake up the iPad and the screen appears.

The fun doesn’t end there though. Also unveiled was a new update to iOS which is iOS 4.3. iOS 4.3 includes safari and air play enhancements and improvements. Also included is iTunes sharing which allows you to play movies, podcasts, or music on any device with iTunes without downloading or syncing. On the side the lock switch can now be changed to be a rotation lock switch or a mute on or off switch. Last but not least, iOS 4.3 brings the mobile hotspot feature to the iPhone 4 which allows you to share cellular data to five wi-fi devices at once such as your Mac, iPhone, iPod, or iPad.

So are you up for Apples newest products? What are your thoughts on iOS 4.3? Is the iPad 2 your choice?