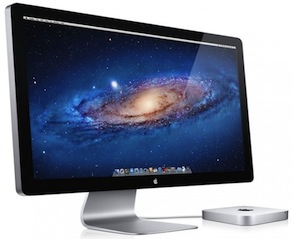 Alongside everything else, Apple also announced a new Apple Thunderbolt Display. Almost identical to the previous 27-inch LED Cinema Display, the primary upgrade to Apple’s standalone display offering is Thunderbolt compatibility, enabling the device to be used within daisy-chained configurations of the new high-speed data and display connectivity standard. With the new standard, users can for the first time run two displays off of a single Thunderbolt port on Macs offering enough graphics horsepower to support the pixel load.

The new LED Cinema Display will be available within the next 60 days and is priced at $999.