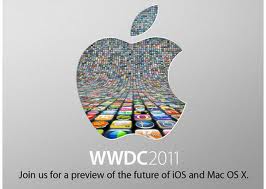 This morning straight out of Cupertino, California Apple has announced they will kick off WWDC with a keynote on June 6th at 10:00 in the morning to announce iOS 5, Mac OS X Lion, and Apple’s new service iCloud. The following statement was released this morning by Apple:

CUPERTINO, California—May 31, 2011—Apple® CEO Steve Jobs and a team of Apple executives will kick off the company’s annual Worldwide Developers Conference (WWDC) with a keynote address on Monday, June 6 at 10:00 a.m. At the keynote, Apple will unveil its next generation software – Lion, the eighth major release of Mac OS® X; iOS 5, the next version of Apple’s advanced mobile operating system which powers the iPad®, iPhone® and iPod touch®; and iCloud®, Apple’s upcoming cloud services offering.

Apple has revolutionized the way we use technology from the Mac, the best personal computer in the world, to the all new iPad. iOS 5, Mac OS X Lion, and iCloud are going to make Apple’s products even better. As usual we will have all your coverage from WWDC and the keynote on June 6th so be on the lookout not only here on the website, but also on our official youtube channel for the latest and greatest news! Link Below!

So what do you think will finally arrive in iOS 5? Will iCloud be revolutionary? What made the final cut into Mac OS X Lion? Leave your comments below!