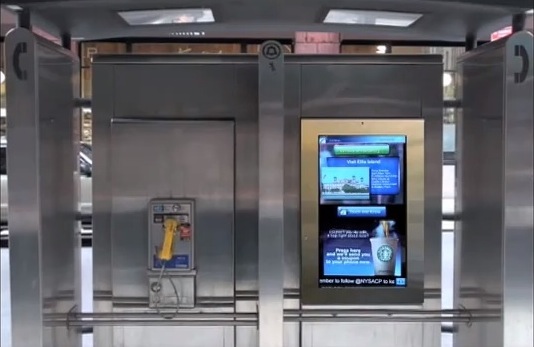 New York City is planning to replace pay phones with wifi enabled touch screen boards. New York City will start a program to install smart screens in various pay phone booths. The goal is to replace all of the pay phone booths with these new smart screens. All the public pay phones will go down by October of 2014. The new smart screens will be able to show ads on the smart screens for the city to get money. But the people that go to them will not have to pay. With these new smart boards people will be enabled to use these screens to get info on restaurants, stores, attractions, and traffic information. They will also enable people to call NYC’s 311 complaint line. This smart screen will be available in various languages. Later, people will be able to use Skype on these handy smart screens. People will also be able to surf the web on them. The smart boards will also have a wifi hotspot for smart phones.